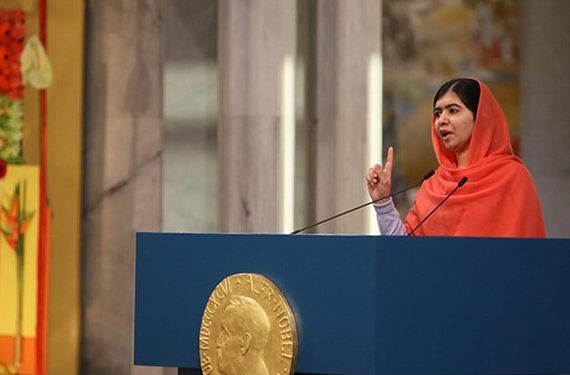 What can we learn about the importance of gender equality in the industrialised world from a 23-year-old Oxford graduate who grew up in rural Pakistan? Plenty, it seems. This is a young woman whose life – and near-death – story has created international headlines. She is an ambassador for the education of all women to ensure a fairer society and greater parity between the sexes.

OK, so I’m not talking about just any Oxford graduate. My focus is on the youngest ever Nobel Peace Prize laureate Malala Yousafzai, who recently featured as a guest on the BBC’s Desert Island Discs. She explained that her drive to enable all girls to have access to education, up to – at least – secondary level, started when she was a young girl. She was alerted to gender inequality by witnessing what was happening on her own doorstep and how girls were being denied an education.

She attributes much of her single-minded tenacity to bring about change, to her father, Ziauddin Yousafzai, an enlightened school teacher who was determined to give his young daughter the same opportunities as a boy.

She told Desert Island Discs presenter Lauren Laverne, “I am lucky that I have an amazing feminist father. I say that he was a feminist before he even knew the word feminist. He was not just preaching about the equality of women; he was actually doing it. He ensured that I got my education, that I am treated the same way as my brothers get treated.”

This was not the norm in rural Pakistan, where, traditionally, young girls went to work, while their brothers went to school. Malala’s outrage underpinned her mission to bring about reform, much to the fury of the Taliban, who tried to kill her for daring to challenge their repressive regime.

Malala explained how her father’s attitude grew from his own family experience. He had five sisters and two brothers and he “noticed the discrimination with his own two eyes”. When his parents served food, the boys would get bigger portions than the girls and only the boys went to school.

“So, for my father the question was: why is it that just because he’s a boy, he’s getting all these privileges?” said Malala.

“He decided that when he’d have his own daughters or daughter, he would make sure that they’re not discriminated [against], that she’d get equal amounts of food and chicken and everything that she wants, and that she is sent to school and that she gets her education. For him it was witnessing that gender discrimination with his own eyes that changed him.”

She clearly holds her father in high regard as an exemplar of how parental attitudes are instrumental in shaping children’s expectations and destinies. Treating boys and girls as equals – and avoiding gender stereotypes – at an impressionable age is the key to creating an equal world because if there is no differentiation between what boys and girls can achieve – the perception is that there are no limits along gender lines. It opens up the world to both sexes and enables both to seize the endless possibilities life offers without the barricades of sexist ideals about what constitutes suitable roles and careers for men and women.

Malala now campaigns around the world for better education for girls through the Malala Fund, a charity dedicated to giving every girl an opportunity to achieve their full potential.

An education is a passport to seizing the day. We need businesses to recognise the importance of investing in girls for the long-term goal of encouraging more women to pursue careers on an equal footing with men for the many gains that a diverse and inclusive workforce brings.

Take it from Malala, “With more than 130 million girls out of school today, there is more work to be done. I hope you will join my fight for education and equality. Together, we can create a world where all girls can learn and lead.”

If you liked this article, you may also like: Wanted: more women digital role models to bridge the gender gap