Are We Being Cowards if we Don’t Speak Out? 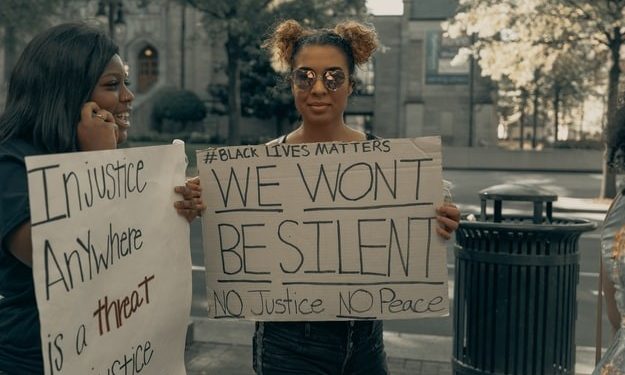 “Silence becomes cowardice when occasion demands speaking out the whole truth and acting accordingly,” according to Ghandi.

He might be right.  After all, do we not become complicit if we witness something we know to be wrong and say nothing?

Indeed, silence can often be mistaken for approval or agreement.

Luckily that isn’t what’s happening today.  The world is speaking out loud and clear against racism.  But it took the death of yet another black American to overfill our cup of  tolerance.

What about other, less severe situations and biases, in the workplace for instance?  How do we speak out against them?

Here at Voice At The Table, when we begin to create a culture of tolerance and inclusion in the workplace, we break it up into individual inclusive behaviours – the building blocks of a culture that welcomes and values different views and experiences. Speaking out is one of these behaviours.

Speaking out in the work context doesn’t have to amount to a protest or dispute.  We also don’t need to wait until something bad happens in order to speak out.  The best way to practise speaking out is to do it gently and frequently, especially when we hear or witness something that doesn’t sit well with us.  When a colleague utters a racially-charged remark, for instance, about someone who is not in the room.  Or when others are joking about a female colleague who leaves “early” to pick up her child from nursery.  Or when the manager says that, while working from home once a week is the company policy, that policy does not apply to her team.

Setting the record straight is not difficult, but takes courage and practice.

When we speak out, it’s often best to keep the tone casual but the message serious.  Many people prefer to use humour to call out inappropriate behaviour.  I’ve heard women say to men, who had lowered their gaze below eye-level when speaking to them, “Hello my friend, my face is up here!” which is usually followed by an apology, after which the conversation moves on.

Speaking out doesn’t necessarily need to create conflict.  If we can practise being polite, cool-headed and curious about the other person’s statement or demeanour, we often achieve more than when we get upset or annoyed about it.  One could, for example, say in response to a racially charged comment “I’m sorry, for an instant I thought you said that …… is that right?”   Playing the statement back to people often gets them to think about it and hear it in a different way, sometimes differently from the way it was intended.

We have to remember that most people want to do the right thing and don’t mean to offend.  So, when we challenge people, we’re helping them understand how their words or deeds may make others feel.  In most situations, they’re grateful for us pointing out how they may have mis-stepped (yet there may be an element of embarrassment too).

Another way to speak out is to draw an inference from one situation to another.  You might say “So, what you just said is that …..   How does that work in [another scenario?]” or “I wonder whether you would have said this to me if I were a man/a white woman/a straight man/a person who is not in a wheelchair…”

Speaking out doesn’t have to be confrontational.  The more we try to speak out the better we get at it.  The better we get at it, the more we can encourage others to do it, as well, gradually creating an environment in which people feel safe to speak their minds and are encouraged to learn and grow when something they say or do doesn’t land the way it was intended.  In this way, we create a work environment in which all individuals are valued for who they are and can fully contribute with their diverse thoughts and experiences.

I hope you give it a try and do it often.

To learn more about how to communicate impactfully, especially across screens, join our virtual training with Jayne Constantinis Virtually Skilful later this month.