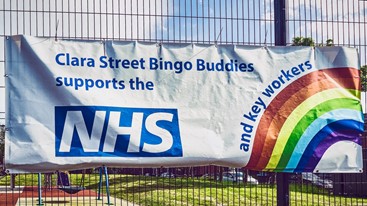 The other day, I was reminded of a meme that went viral (pardon the pun) during the height of the Covid pandemic. It parodied a scene from Back to the Future, where the Doc warns the movie’s hero, “Whatever happens Marty, don’t ever go to 2020.” It sums up what a terrible year it’s been for everyone. But amid the gloom, there have been some bright lights, so let’s end the year on a positive note and celebrate the best bits.

Surely, the most heart-warming event was when, 99-year-old British war veteran Captain (now Sir) Tom Moore, raised the nation’s morale – during the dark days of the peak of the pandemic – and £33 million for the NHS.

He started out on his unanticipated route to fame by walking 100 laps of his garden, wearing his service medals and using his walking frame for support, hoping to collect £1,000 for the Health Service! His efforts earned him a knighthood, a biopic – which is currently in production – and led him to record a cover of You’ll Never Walk Alone—reaching No. 1 in the charts. Now, having turned 100, Sir Tom has launched a new campaign with the hashtag #WalkWithTom to raise money to combat loneliness and support the bereaved.

Devastating though the disease has been on all our lives, there have been signs that changes in behaviour – due to Covid-19 – have triggered a number of environmental benefits; with many countries reporting cleaner air, beaches and less traffic over lockdown.

It also brought out a sense of community, most noticeably when the nation got behind the NHS to take part in the weekly Clap for Carers. It was a ritual that united the country, with applause rising from doorsteps and smiles and waves shared between neighbours who had never previously acknowledged each other. Fed up with being isolated in our homes, suburban streets became a social hub galvanising us to speak together as never before.

Our change in habits, prompted by Covid, may have had a beneficial effect on global warming, with CO2 emissions expected to drop by 7% this year, according to estimates made by the Global Carbon Project (GCP). It suggests these emissions will clock in at 34bn tonnes of CO2 (GtCO2) this year – a fall of 2.4GtCO2 compared to 2019.

This annual decline is the biggest absolute drop in emissions ever recorded, the researchers say, and the largest relative fall since the second world war.

Thanks to the tireless work of young activists such as Amika George, founder of not-for-profit organisation Free Periods, free sanitary products are now available from the government for girls across the UK. In June this year, New Zealand Prime Minister Jacinda Ardern followed suit, announcing that her government would pay for period products in schools in an attempt to end period poverty, which sees girls across the globe missing lessons while having periods due to the prohibitive cost of sanitary products.

Manchester United striker Marcus Rashford successfully pressurised the government into pledging £400 million to provide free school meal support for children whose families were struggling financially. Rashford spearheaded a remarkable campaign that saw over a million people sign a petition in favour of free school meals. His action was the catalyst for dozens of communities across the country that enlisted local volunteers to deliver food packages to families in need during school holidays.

Kamala Harris made history as the first woman Vice President of the United States. Moreover, she is the first Black and the first Asian-American US vice president elect too. “While I may be the first woman in this office, I will not be the last,” Harris, 56, declared in her victory speech, “Every little girl watching tonight sees that this is a country of possibilities.”

Finally, we have several Covid vaccines – a Christmas present to the world. And more encouragingly, at the forefront of the UK’s Oxford/Astra Zeneca jab are two women – Professor Sarah Gilbert and Professor Catherine Green – two names that will forever be associated with the pandemic in a (life-changing) positive light. I hope they receive the recognition they deserve in the New Year’s Honours list.

If you liked this post, try reading this one.