The Long March for Equality in the Armed Services 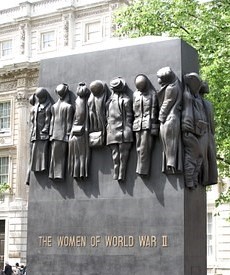 November is symbolic as the month we remember those who’ve nobly fought and lost their lives in combat. It’s 80 years since the start of the Second World War and a pertinent time to consider the changing role of women in the armed forces from rear-guard support to front-line action.

I recently joined the People’s Vote march in central London. Being sandwiched between the vast number of banner-waving supporters snaking through the capital made it difficult to take in the architectural splendour of some of the city’s most historically significant buildings.

However, as the crowd thinned out momentarily in Whitehall, ahead of the summit in Parliament Square, I looked up to see a beautiful monument – a haunting sculpture dedicated to the memory of “The Women of World War II”.

These women were from an era where a time of national crisis raised their profile as the support network for the war effort. In fact, their service during World War II inspired the fight for social change and equality.

With thousands of men away on the front line, women were called up for war work, taking roles traditionally filled by men, such as mechanics, engineers, munitions workers, air raid wardens, bus and fire engine drivers.

Their status was changing and following a conscription ruling, by mid-1943, almost 90 per cent of single women and 80 per cent of married women were working in factories, on the land or in the armed forces.

All of them helped win a war, but unconsciously they were triumphing in the battle for recognition as a competent workforce in their own right and nudging the mindset that perpetuated inequality between the sexes. However, it would take another 70 years for service in the armed forces to be determined by ability alone and not gender.

In 2002, the then Defence Secretary, Geoff Hoon, said he was not prepared to lift the ban on women serving on the front line because officials were concerned that women’s presence might distract men – either because of their innate need to protect women, or simply because of sexual attraction. Really, in the 21st century? Yes, really.

Finally, in 2016 – a ban on women serving in close combat ground roles in the UK military was lifted. This paved the way for female troops to serve in infantry roles across the board, including elite special forces’ units like the SAS and Royal Marines; thereby ending inequality on the front line.

It was a watershed moment, which not only made the armed forces a more modern employer but helped ensure the right person was recruited for the right role.

But far from being something to be celebrated, it’s a shameful reminder of how long it took to get this far. Germany opened up combat roles to women in 2001, Australia in 2011 and the US in 2013.

The Whitehall monument is a reminder of the long march taken in the battle for gender equality and a symbol of hope for all women who feel there is still more work to be done.