The Wannabes Who Redefined Feminism for a Generation 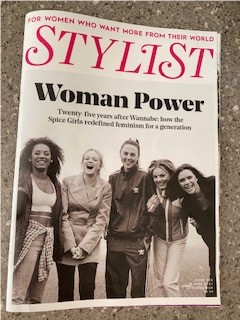 Role models can be the driving force in shaping a young person’s ambition. It’s a quarter of a century since “girl power” entered the lexicon and changed attitudes from “could do” to “absolutely won’t take no for an answer”. July is Make a Difference to Children month and a perfect opportunity to explore the importance of strong role models, especially for young women.

The Spice Girls may not be the obvious choice of role models for young women, but when they burst onto the world stage 25 years ago, with a spade full of outspoken attitude, they brazenly shook up the status quo and encouraged teenagers, tweenagers and everyone either side to tear down the establishment and re-write the rules of possibility.

I remember work colleagues with young daughters saying they’d been transformed; ready and able to stand up for their rights in the playground in a way that they’d never done before. They had synthesised the pop quintet’s red-hot, rebellious energy and executed it to their advantage.

I know that those daughters channelled girl power to inflate their self-belief and pursue successful careers; their Spicemania heroines had made their impact.

This includes 39-year-old Kirsty Osborn, who totally embraced the Spice Girl phenomenon, along with her teenage school friends.

She loved the idea that the Spices each gave themselves a distinguishing personality, highlighting their own differences and individual characters. This was approvingly novel and refreshing.

She said, “As young girls, you could identify with them.”

She believes that they played a huge part in challenging the kind of stereotypes that pigeon-holed girls and women into believing they could only be successful in one category.

“But then Sporty was athletic AND in a girl band. Baby was shy BUT she was singing in a group. They stopped people labelling you like a jam jar.”

Female role models are the catalyst to motivate ambition. If we can’t look up and see women who have been successful, we are less likely to be successful ourselves. The presence of women in leadership positions and the opportunity to network with them is vital to help motivate women to advance in their careers. Seeing is believing.

They also embolden us to take a stand in other areas of our lives, as evidenced by a handful of activists who’ve raised the bar for firing a shot at complacency.

In the 21st century, Soma Sara – the founder of Everyone’s Invited – has been a power broker for a new generation of young women. Again, underscoring the importance of not taking “no” for an answer and having the confidence to stand up and be counted. The organisation is a platform for girls and young women/men to highlight cases of sexual assault. Soma felt that the world needed to wake up to the realities that were being swept under the carpet.

It’s been a liberating and life-changing experience for those damaged by unwanted sexual advances and a chance to be taken seriously, where previously they had not.

In a world where there are more men named John in CEO positions in FSTE100 companies than there are women in top roles, we need all the visible role models we can get.

Teen climate activist Greta Thunberg has been hailed a true role model for children; nominated for the Nobel Peace Prize, she started a worldwide movement that kickstarted mass protests about climate change and launched international debate about the issue.

Recently, Dame Sarah Gilbert, who co-designed the Oxford/AstraZeneca vaccine, was given a standing ovation on Wimbledon Centre Court. It follows on from her earning a spot on The Times’ “Science Power List” in May 2020 for her pioneering work on the Covid-19 vaccine. What an achievement.

And on another sporting note – and while we’re rebooting after UEFA Euro 2020 – let’s raise the stadium roof for the Afghan born Danish football player Nadia Nadim. The 33-year-old was just 11-years-old when the Taliban murdered her father, prompting her family to flee to Denmark. She’s played for the national team 98 times and scored 200 goals, while studying to be a surgeon. Oh, and just for the record, she speaks 11 languages and is on the Forbes list of Powerful Women.