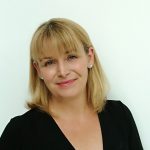 Voice At The Table Newsletter Editor

Rebecca Dalton is a journalist and broadcaster, as well as a television producer/director, who is returning to work after a break. She spent most of her career at the BBC but started out as an indentured trainee on a local newspaper.

During her time away from paid work she studied for a degree in English Literature – and was delighted to be awarded First-class Honours.

She has recently begun developing a media consultancy business. This provides advice and guidance on newsletters and e-newsletters, media training, and courses in Creative Writing and Writing for Communication.

She is excited to be taking on the editorship of the Voice at the Table newsletter. She also edits the newsletter of a heritage and conservation charity and is available for other, similar editorships as well as journalistic and film commissions.