HOTT: Revealing the B – Behaving Inclusively 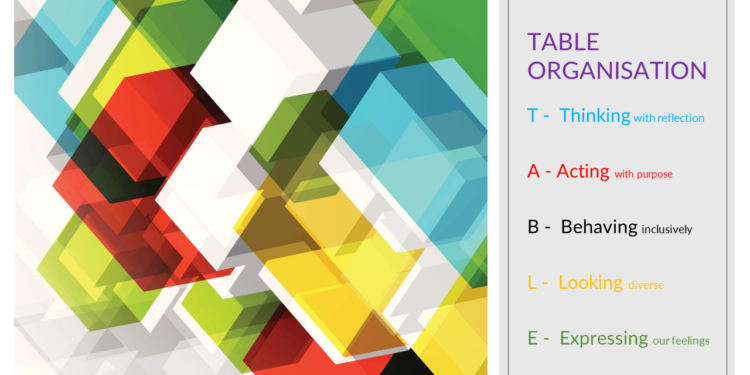 The post below has been featured in the third edition of Housing On The Table, a fortnightly e-shot designed to inspire leaders of social purpose service organisations to transform them to suit the times we live in.

We will be exploring what we call the T.A.B.L.E organisation – which Thinks, Acts, Behaves, Looks and Expresses itself differently from how social housing providers have functioned in much the same way for the past 50 years.   This is a moment to embrace real change – from the Front Line to the Boardroom.

Sign up to receive future editions of Housing On The Table and get access to previous issues.

The B pillar of a TABLE organisation is Behaving Inclusively.

In my recent video podcast to the NHF’s Governance Conference (transcript available on request), I explain that a TABLE organisation starts with “Why”.  Why, is a question about Purpose.

An organisation’s purpose is related to the values it espouses.  This is where behaving inclusively is especially relevant.  In my podcast I say that acting with good intentions is rarely good enough (see below).  This is especially true when the purpose is to address inequalities, many of which are longstanding and deep rooted.

Ticking the box may fulfil the mission but is it meeting the purpose?

What’s on the TABLE today – are we behaving inclusively or dressing the windows?

Last week, the G15 group of London’s largest housing associations launched G15 Accelerate, described as “a new leadership development programme for BAME managers to help develop their potential to become our future leaders”.  Their target is to more than double the BAME proportion of G15 board members to 30% by 2025.

The programme follows on from a BAME diversity pledge signed by G15 CEOs in April, the latest of many similar attempts reaching back to the creation of BME housing associations in the 1970s and 80s.

These attempts notwithstanding, the evidence from three housing diversity surveys published by Inside Housing since 2016 suggests, not much has changed in the lack of representation of BME leaders on boards and executive teams.  Some even say that housing providers have gone backwards in recent years.  In other words, the collective behaviours have not matched the rhetoric and pledges made by housing leaders.

The key to addressing under-representation of black people at senior level is not more pledges or programmes.  There is enough evidence to show that on their own, they don’t work.  This is what we refer to as ‘window dressing’ – something that purports to tackle the issue, but fails to make a real and lasting impact.

Is it time for housing leaders to start looking beyond how to develop and recruit to their leadership teams and consider whether their behaviours are truly inclusive?

Voice At The Table has created a framework of eight inclusive behaviours which, once embedded, changes how we interact with each other.  Inclusive behaviour helps to overcome unacknowledged attitudes or even prejudices resulting from a lack of understanding or empathy towards the experience of others.

Behaving inclusively goes beyond correcting unconscious bias and balancing representation at the top of organisations.  It requires us to have humility to recognise that ours isn’t the only way, to be curious about someone’s lived experiences and not rush to judgement when we encounter views which differ from our conceptions.

Behaving inclusively means being careful with our use of language and stepping in when someone speaks or acts in a way that marginalises or diminishes colleagues.

Most of us think of ourselves as being inclusive.  But extending rules and policies is easy if it doesn’t require a lot of effort.  So is welcoming individuals that make our leadership teams look more diverse (so long as they don’t challenge our own perceptions or impose other burdens).

But rarely are these efforts enough.  Leaders must be willing to go further than token gestures and statements of support – and that includes creating programmes that might advance a small number of people.  We must be willing to challenge ourselves, examine the data and evidence, listen to people’s stories. prepare to feel uncomfortable and resolve not only to do more for others but to grow and develop ourselves.

Striving for more than just project-managing diversity (as many of the initiatives can be described) takes a lot of effort and commitment to change how we see and interact with the world.  That’s what behaving inclusively means.

Only when we are truly committed, will we be able to act with purpose to attract, retain and promote people of diverse backgrounds inside our organisations.  In this way, the B pillar of a TABLE organisation leads us to the A pillar – acting purposefully.  More on the A pillar in our next issue.

For now, we encourage you to find the courage to look inward, confess to having blind spots when it comes to inclusivity and take committed and concrete steps towards behaving more inclusively.