Did Trump’s Patronising Approach to Women Cost Him the Election? 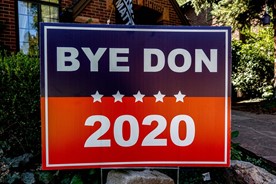 It’s safe to say that Donald Trump suffers, nonchalantly, from “Foot in Mouth Syndrome” but, during the election campaign, when he uttered the words, “We’re getting your husbands back to work,” at a rally in Michigan, it made me think two things. Firstly, this man is not fit to govern with that draconian mindset and secondly, and more depressingly, how can anyone still retain this attitude in the 21st century?

I, optimistically, believe that Trump’s views are not representative of the generic American male population. I also believe that a perfect storm arose to funnel the women’s vote away from Trump.

Not only did he lose the female vote by adopting a misogynistic attitude and denigrating women in employment, he failed to grasp a serious consequence of Coronavirus: that company closures, associated with the epidemic, have hurt working women more than working men.

“The COVID-19 pandemic threatens to roll back gains in women’s economic opportunities, widening gender gaps that persist despite 30 years of progress,” warned the International Monetary Fund experts, in July.

Research by McKinsey & Company and LeanIn.Org revealed that 25% of women claimed they were considering slowing down their career or stepping away completely due to the demand the pandemic has placed on working mothers.

Late in the day, Trump’s campaign recognised the importance of the white, suburban, American, working woman’s might in the battle for the White House (a smart move in the quarter that marked the 100th anniversary of US women’s enfranchisement). Some went as far as saying that they held the key to the outcome of the election. But this cohort had lost faith in the Republican party. It’s hardly surprising, when you listened to Trump’s rhetoric… expressing opinions that were not only offensive, but out of touch with the very people he wanted to woo.

Polls revealed that Biden consistently led Trump among white suburban women by 51% to 44%, and 84% of black women reported viewing Biden favourably. By late October, Biden led Trump by 25% among all women – the largest lead in modern political history. Some have gone as far as claiming that Biden owed his victory to women.

When the 2020 election statistics are assessed and dissected, they could reveal the biggest gender gap – the difference between how many women support the winning candidate compared to the losing candidate – in modern history, according to data compiled by the Center for the American Woman and Politics at Rutgers University. The previous record was set in 1996 and again in 2016, when it was 11 percentage points.

Whatever conclusions are drawn from the election, we can safely say that the result has liberated US women from the subjective, chauvinistic and sexist views that Trump contended and upheld. A new era is in sight, especially with Kamala Harris becoming the United States’ first female vice-president, and expectations are running high.