Women: Learn to Shout About your Successes! 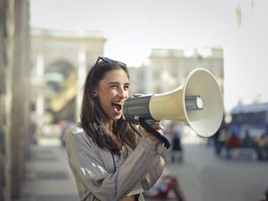 It seems to come naturally to men, but why do women find it so hard to celebrate and promote their achievements? Do we need to re-assess our value and self-worth?

A 2017 LinkedIn analysis of millions of US members found that men brag far more than women do when talking about work achievements. Even if they had the same job, women would include 11% less of their skills on their profile than men.

Research shows that women underestimate their own performance.  One study found that men are 60% more likely than women to say they are qualified for a job even if they have the same credentials.

None of this would be a problem if employees were assessed objectively. However, often a promotion or allocation of a high-profile project is based on reputation.

Why is it so hard to boast about achievements?

I believe boasting is hard for women because the girl-culture they grow up in is different from boy-culture. Girls aren’t supposed to boast. If they do, they are ostracised by other girls.

From a young age, girls bond by confirming each other. When they have finished a drawing they will say, “Look at my drawing. I hate it. It’s so rubbish.” Another girl is then supposed to respond by saying, “No way! It’s brilliant, I love it!”

Grown-up women do it too. “No, you really don’t have to be good at singing – none of us is – we would love you in the choir.”

There’s a constant chorus of women underplaying their capabilities.

In contrast it’s completely normal in boy-culture to boast about achievements. Boys get respect from other boys when they shout, “I made more goals than you!”

When boys are taught boasting isn’t nice, they learn to boast in more subtle ways. For instance, I heard a six-year-old boy say, “I don’t want to boast, but I did beat him yesterday.”

It’s not surprising that it’s hard for women to learn to boast about achievements. They’ve been led to believe that it’s wrong!

The #1 tip when you need to boast about achievements: change your perspective

So, what can you do? The most powerful technique that has worked for me and for many of the women that have been to my talks is to change your perspective.

Rather than boasting because you want to impress others, ask yourself how it would help others if you would talk about your achievements?

When asked, men say they want to hear about achievements because they believe these show passion and knowledge.

Your colleagues want to know what you are good at. That way they know what problems you can help solve.

Your line manager needs to know what you have achieved, so they can put you forward for new challenges and boast about team achievements.

Once you start thinking about helping rather than impressing, it gradually becomes easier to share information about your capabilities and achievements.

How to make it work for you:

To make it authentic for yourself,  you need to do this the right way. Start by listing a number of achievements that you are, secretly, proud of.

Next, listen to how men and senior women boast; how do they let you know that they are incredibly good at what they do? Then experiment with dropping your successes into conversations too. Boast about your achievements.

“When I worked on [insert high-profile project here], it was just as you say….” or “A good example of what I’m talking about is when I worked on [x transaction] and we did…”.

But it’s not just women that can make a change. Colleagues, both male and female, can help by highlighting achievements of women.  Organisations can also help by designing more objective and transparent promotion systems where it is less important to shout about your achievements to get ahead.

Until then, do it your way, but do it!