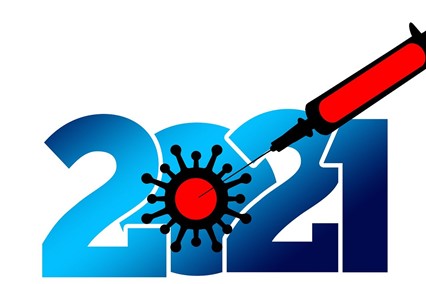 2020 has been beheaded, hung, drawn and quartered and accurately demonised as an annus horribilis. So, let’s move on. This year sees the 21st century come of age, so let’s celebrate. I’m optimistic that 2021 will give us all something to look forward to. Here are some of the highlights that I’d like to share with you.

I’m going to dive straight in and declare that I’ll be appreciatively cheering, from this side of the pond, the inauguration of Joe Biden – the 46th US president – on Wednesday 20th January and equally – his right-hand woman – Kamala Harris, the first female and woman of colour vice president in American history. I believe this is a turning point for the country and for women in the US and that, if Kamala’s reign inspires other women to go into politics, optimistically, in four years’ time we will see at least one female candidate running for the top job.

More vaccines. We cannot thank scientists enough for their relentless pursuit and deliverance of Covid-defeating vaccines, some of which are now in circulation, including Pfizer/BioNTech, Oxford Astra-Zenica and Moderna, to name but three. There are others being developed or trialled in different countries, including Russia, Germany and Australia. The greatest challenge now is supply and distribution to ensure mass immunisation.

The surcharge on women’s sanitary products took effect on 1st January. This will reportedly save the average woman almost £40 over their lifetime – with a tax cut of 7p on a pack of 20 tampons and 5p on a pack of 12 pads. It’s a huge achievement in the fight to end period poverty.

There may be a slow return to mass gatherings at concert and theatre venues, but, for eclectic music fans, Eurovision is on. The ever-popular and extravagantly camp Song Contest, which was postponed from 2020, is currently pencilled in for May in Rotterdam. Will the UK receive nil points for exiting the EU? You’ll have to tune in to find out.

The 2020 Tokyo Olympics were paused because of the pandemic, but are now scheduled for July 2021. This is a huge boost for the world’s elite athletes who are engaged in a punishing training schedule to prepare for the international event. It may not resemble the traditional Olympic competition as we know it, but the International Olympic Committee (IOC) has stated that it will be a “simpler, more restrained approach”.

It’s the 75th anniversary of BBC Radio’s Woman’s Hour. In its long history, the show has tackled challenging and controversial topics and had a host of illustrious female presenters (despite initially being hosted by a man). The Queen, who is reportedly an avid listener, described Woman’s Hour as a “friend, guide and advocate to women everywhere” in a message sent to the BBC Radio 4 programme – at the beginning of the year – in tribute to its landmark birthday.

And staying with the Queen, Her Majesty, who is already the longest-reigning monarch in British history, will celebrate her 95th birthday in April. Her husband will mark his centenary in June. Covid-permitting perhaps we’ll be able to hang up the festive bunting and indulge in some good old-fashioned street parties, bringing communities together for a much-needed, morale-boosting national celebration.